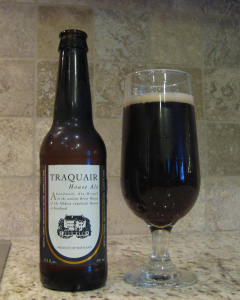 Traquair House Ale pours a dark chestnut color that is virtually impenetrable by light. The head developed one finger thick even with an extremely aggressive pour. There was minimal lacing and short retention.

My nose is picking up on a handful of similar aromas: roasted malt, toffee, caramel, and molasses. They all balance each other out quite well.

The taste was not as loaded as the aroma. I only really notice roasted and nutty caramel and toffee. It is surely less complex then smelling the beer let on.

The mouthfeel is quite light and carbonation is low to medium. The alcohol content of 7.2% is not any more noticeable than a beer with 5%. It goes down quite easy.

The individual aspects of this beer are less than the sum of its parts. My general overall impression of this beer is quite positive. It has very complimentary flavors, smells, and mouthfeel that combine for a very enjoyable drink.

This entry was posted on January 25, 2011 by gramity. It was filed under 3 Pints, A Beer a Day, Beer Tasting, Ratings, Scottish and Irish Ale, Strong Scotch Ale and was tagged with ale, Beer, beer-a-day, house, scotch, scotland, scottish, strong, Tasting, traquair.