My wife and I were in Munich for about 4 days in September of 2009. While there we learned a great deal about the local beer, it’s history, and the beer culture so ingrained in the German state of Bavaria. Munich immediately seized a special place and meaning for me and I continue to be fascinated by all things beer. This has lead me to write this piece to share what I know about beer as it relates to Munich.

While we traveled we took a “Beer and Brewery” tour with a local guide that also taught English classes to the local Bavarians. He would always invite his English class students along on the beer tour to provide them an opportunity to polish up their English and to add an authentic presence to the tour. Not a bad idea in my opinion.

I should note it was these gentleman who informed me that people living in Munich or elsewhere in Bavaria do not often consider themselves “Germans”. They prefer to be called “Bavarians”. I can’t speak to how much of a biased comment this was. This is me in the front and the two Bavarian dudes along for the tour in the back: 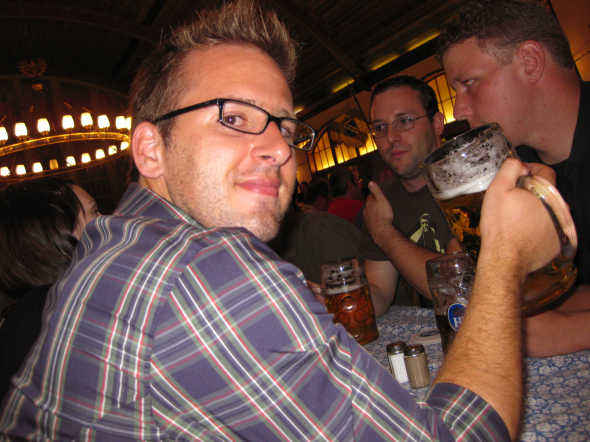 In Germany beer is classified as “food” for tax purposes and is often lovingly referred to as liquid bread. This has the effect of reducing the end retail price of beer substantially. Beer is almost always available nearby and at prices lower than bottled water or soft drinks.

There are two sizes that the beer is typically served in: half liters and liters. Males who order half liters are often chastised into upgrading to one liter. Beers are served in their respective Maßkrug (the large dimpled mugs).

Beer has been brewed in Bavaria for a very long time. In fact, the Weihenstephan Brewery (Bayerische Staatsbrauerei Weihenstephan) in Freising, Germany (North of Munich) used to be Weihenstephan Abbey and has a very credible claim to being the oldest continually operating brewery in the world.

The Abbey can trace its roots back to the year 768 and evidence that a local hop farm paid tithe to the Abbey. There is documentary evidence showing that the City of Freising granted a brewery licence in 1040.

Back in that day beer was brewed using whatever the Brew Master wanted. This led to very diverse (and sometimes questionable) ingredients being used. This also meant beer could be brewed with barley, wheat, rye, or whatever you wanted.

Eventually brewers were beginning to compete with bakers for the limited supply of wheat and rye available. This caused prices or availability to suffer and was affecting the price and availability of bread.

This law restricted brewers from using wheat or rye and required that barley be used in all beers. The law originally specified that beer could only be made from a specific three ingredients:

You keeners out there will have noticed the absence of yeast. Yeast was not mentioned in the text as the effect the microorganism has on beer fermentation was not yet discovered.

Although introduced in 1487 the Reinheitsgebot became law in 1516. This became an integral part of the brewing and culture of Bavaria. This was true to the extent that Bavaria required the adoption of Reinheitsgebot before they would agree to German unification in 1871.

Later in Germany’s history yeast and wheat were permitted as ingredients in legal beer.

By 1800 Munich was home to over 70 breweries. Similar to what can be seen in the history of American beer many of these breweries began to consolidate into fewer and much larger players. There were six giants formed from this and they still exist today.  They are sometimes referred to as “the Big Six”. They are the only breweries permitted to brew beer for Oktoberfest. They are:

As of the time I write this Augustiner and Hofbräu are the only two that have not been purchased by international conglomerates. Augustiner is independently owned and Hofbräu is state-owned. Paulaner is owned by Brau Holding International AG, Hacker-Pschorr by Paulaner, and Spaten-Franziskaner and Löwenbräu by ABInBev (!?!).

Augustiner is the most popular beer for the locals with Hofbräu in second. I believe they are well aware which beers are owned by international companies and do not like it.

I haven’t yet been to Oktoberfest but I will get there one day!

The Bavarian version of “Cheers!” is “Prost!”. When you say Prost! to someone in Bavaria there is a specific etiquette that you should follow.

First and foremost, you need to make eye contact and hold it all the way through drinking your beer. If you fail to do this you will have 7 years of bad sex. Now I don’t think this guarantees you’ll get any sex so don’t get too excited and intentionally break eye contact thinking bad sex is better than none.

I was also shown that many people will say “Prost!” while holding their krug by the glass handle then slam it down onto the table and let go. They then take their fingers and stick them through the handle and grasp the side of the glass, pick it up, then drink. All this is done with eye contact.

It is the funnest way to cheers I have ever seen.

Beer Gardens have got to be one of the coolest things about Munich. We were told that there were seven requirements to be an official beer garden. Too bad I can’t remember them all!

The only ones I remember were that you had to be allowed to bring in your own food and that they had to be located so that they were underneath the shade of trees. I will do some research and see if I can dig up the rest of them.

This entry was posted on January 25, 2011 by gramity. It was filed under General, In-depth and was tagged with bavaria, Beer, in-depth, munich.