Stir Stick Stout poured a dark and murky black – almost no light was penetrating the beer. The head was one finger thick and a nice tan color. Pretty characteristic of stouts brewed with coffee. Head retention was moderate and left lots of impressive lacing on the pint.

The aroma will tell you that this beer was brewed with coffee (if you didn’t read the label and see that it was locally roasted Ethiopian beans). Coffee is prominent in the nose but is also accompanied by bitter chocolate and roasted malts.

The first sip brings initial flavors of coffee, chocolate, and faint smoke to the tongue. The faint smoke taste dissipates quickly and allows the roasted malts and other notes to really come through. I found that the carbonation – though not ridiculous – was high enough to subtract from your ability to really taste all the nuances of the beer. A very tasty stout though.

The mouthfeel was a little thin but acceptable for the ABV. Carbonation is on the high side for a stout but not so much that it wrecks the beer, it just masks some of the characteristics they have managed to instill in the beer.

As in interesting side note, this bottle cap was wax-dipped it seems. When I popped it off little pieces of white stuff fell onto the counter and upon closer examination – were wax! 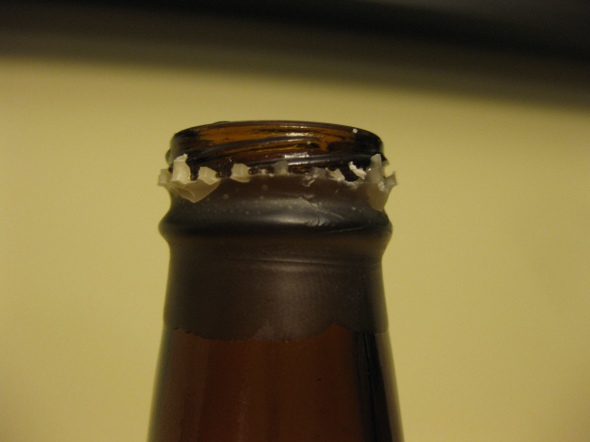 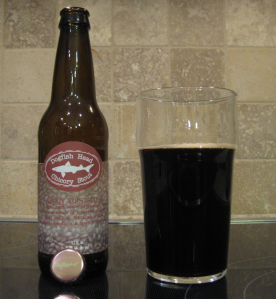 I am on a bit of a Dogfish Head kick here after watching some TV and documentaries that featured the brewery. I decided I should try some of their beers and support them as they seemed like a cool group. I decided to start with a stout – familiar territory.

Chicory Stout pours a very dark brown, almost black, color. I poured aggressive and barely 1 cm of head developed. I was actually quite unimpressed by the lack of head. What did develop was an appealing tan color. I could barely comment on the length of retention because I started with so little and it was gone by the time I finished taking a picture. Carbonation seems fine though.

The aroma is of loads of dark roasted malts followed by a distinct coffee (I guess Chicory) and some more understated dark chocolate. The aroma is extremely reminiscent of Russian Imperial Stouts (RIS) but toned down a few degrees. The smells have made some big promises…

The taste is dominated by dark malts and dark chocolate flavors. The coffee completes the combination and comes closer to the finish. The coffee fades quickly and the aftertaste is again of chocolate. Hops are present but hard to detect. They provide a good balance to the sweetness in the beer.

The body is moderate and the mouthfeel is smooth. This beer is extremely easy to drink.

To be brutally honest I find the beer a little watery and weak for my liking. I think I would appreciate the flavors more if they were a bit more bold. This is almost certainly my RIS bias coming through and not necessarily the fault of the beer.

This beer offers the closest flavor profile to a RIS stout I have yet seen from a Stout with the lower ABV. This makes for a very drinkable combination and could be valuable if you are looking for a sessionable Stout.

Pours clean black resembling a dark cup of coffee with a cappucino colored head. The head was thick and about two fingers in the glass provided at the Sugar Bowl. It faded rather quickly and left decent lacing on the glass.

The aroma is of espresso beans and dark chocolate. There is a distinct burnt smell. The coffee notes smell like a fresh espresso.

The taste is of strong and old coffee. The freshness you would hope for in the espresso flavor is lacking. Something is off about it (a bit of research has shown me this is probably because they add espresso beans directly to the boil). There is a nice taste of dark chocolate and roasted malts. There are not hints of hops in the beer.

The mouthfeel is smooth and velvety with gentle carbonation. The mouthfeel was one of the more impressive parts of this beer.

This beer was not terrible but I consider this type of beer one of my favorites and can name at least three direct competitors that are clearly superior. Don’t shy away from giving this one a try but you will likely find yourself lead away permanently by better coffee/espresso stouts.

I should point out that my choice of category of “American Stout” doesn’t fit the BJCP guidelines. It should technically go into category 21 or 23 for specialty or coffee beers. But in reality it is a stout. It isn’t really an Imperial but it is 0.5% stronger than the range for American Stout. Many would call this a “double American Stout”. So I decided to put it in American Stout.

Beer Geek Breakfast pours a very deep dark black. The beer cascades a bit to develop a one finger tan head. I noticed the head looks a little lighter where it contacts the beer and slightly darker where it contacts the air on top. This reminds me of the crema in espresso. (Check the picture of the beer to the left and then click here to see some espresso I made recently).

Head retention was moderate and faded into a thin collar. Minimal lacing was left on the glass.

The smell is very appealing to a beer and coffee lover. You definitely smell some coffee but the dominating aroma is roasted malt. Other notes are of dark chocolate and perhaps a hint of licorice. This beer has been named appropriately.

First sip immediately reveals that the flavor profile of this brew is complex. Initially tastes of bitter dark chocolate which progresses to roasted malts and finishes with a definitive coffee aftertaste. I find that as this beer warms slightly the flavors really shine. I favor the coffee which comes out deliciously once the beer has sat a few minutes.

The beer is smooth and somewhat thick in the mouth with medium carbonation. I have tried (and reviewed here and here) several other coffee stouts or porters. This one just usurped the throne as my personal favorite.

I have another Mikkeller coffee based beverage in my fridge right now that may prove to be the true king. Check it out at the Mikkeller site. Should be interesting considering one of its ingredients is derived from weasel shit.