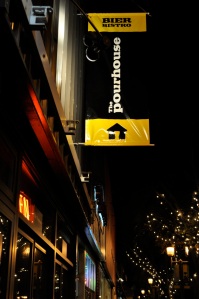 I don’t plan on making this a blog about reviewing pubs or other watering holes but I can’t shake the feeling that I need to air my thoughts on this place. Maybe someone along the way will read it, learn some things, and make some improvements to a pub or restaurant somewhere out there. Maybe even the Pourhouse itself?

Background: On Saturday we went out for a friends birthday and chose to go to the Pourhouse Bier Bistro (www.thepourhouse.ca) on Whyte Ave in Edmonton. We arrived to a moderately busy place with I would guess about 10-20% of the tables available.

It is important to note that this bistro is obviously trying to establish itself as a first-class location for beer connoisseurs in Edmonton. For that, I commend the Pourhose and wish it the best. BUT…this subjects an establishment to a whole new set of standards and expectations from these specialty customers.

On to the nitty gritty.