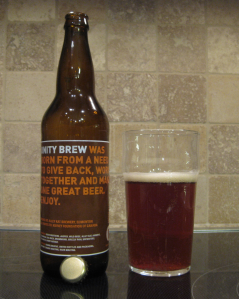 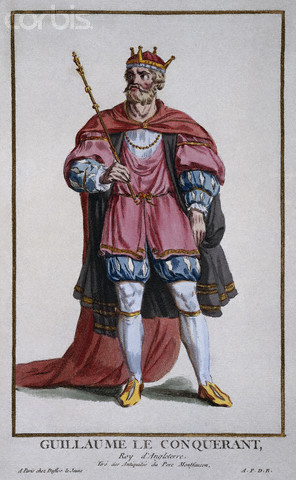 End goal for today was to get the beer into the bottles. There was a lot more work for today’s efforts compared to bottling our Blackout Stout. This was due to the fact that all our bottles have been used one before and also have a Blackout Stout label.

All equipment being used needed to be thoroughly sanitized as well. This included:

END_OF_DOCUMENT_TOKEN_TO_BE_REPLACED

This beer is being made using the Cream Ale kit from The Brewhouse and “hacking” it by creating a mini batch of wort and adding it to the kit.

Other than what is different from the mini wort batch we have modified the kit by discarding the dry yeast and using Wyeast 1098 Brit Ale.

To hack this kit we have purchased 1/2 lb of dark crystal malt and 1/4 lb of chocolate malt. The first thing we did was measure out the malt and add it in approximately 4 ounce batches to a heavy plastic freezer bag. We then used a standard rolling-pin to crush the malt within the bag. You don’t want this to make the malt powdered at all – just enough to break the husk.

We then added all the malts to grain bags and tied them off to prepare them to be added to the heated water. These were set aside.

All equipment being used in the days efforts was then thoroughly cleaned and sanitized using Diversol. This was done while we had 4 liters of water being heated on the stove. 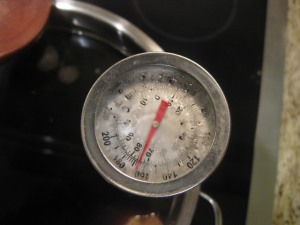 Once the temperature was at 160 F (71 C) we submerged the grain bags in the water. Heat on the element was adjusted to maintain this temperature for 30 minutes.

We stirred the mixture lightly every 10 minutes.

At the 30 minute mark we removed the grain bags from the water and placed them aside for cleanup. The pot of heated wort was then taken outside (it is winter and cold here) and placed in the snow. This is to bring the temperature down to room temperature (approximately 21 C) and is known as “cold crashing”.

Once the temperature was about 21 C the mixture was brought back in the house to the “brewing area”.

Next we added the pH buffer to the primary before pouring the remaining 4 liters of water into the primary. We then added the wort from the beer kit. We were sure to pour this fairly aggressive to adequately aerate the wort. The more oxygen in the mixture the better the yeast will ferment the beer. 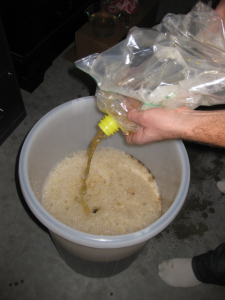 The last thing to add to the mixture is the liquid yeast package. We had “smacked the pack” about 4 hours earlier to break the nutrient pack and release it into the dormant yeast. This starts activating the yeast. We poured the yeast over the top of the wort. You do not stir the yeast at this point because you don’t want to fast track it to the bottom of the bucket.

The lid was then placed loosely on top of the primary and we hoisted it up on to an elevated surface so that when we go to rack the beer to the secondary we don’t need to move the primary and disturb the sediment that will have accumulated at the bottom. We covered the whole thing with a blanket and there it will sit until Brew Day 2 where we rack it to the secondary (i.e. glass carboy).

Brew Day 2 should occur in approximately 3-5 days or whenever the initial fermentation has settled down from the “aggressive” stage.

We have decided what we are going to do for our second batch of beer. It is the base Cream Ale kit from The Brewhouse; however, we are going to “hack” it using some guidelines found online.

To summarize these modifications we would basically be doing a small wort batch independently using some dark crystal malt and chocolate malt. We’ll add this wort to the wort from the kit. The end result is intended to produce a Northern English Brown Ale.

We’ll also be substituting the dry yeast in the kit for Wyeast 1098 – British Ale Yeast.

That being decided…we have started to think about potential names for the beer. After much thought, I have reached what I think would be the most appropriate name.

English Brown Ales are characterized by their nutty flavor. So there is always the temptation to name the beer Busted Nut Brown Ale. But that has been done before.

My vote is to call the beer William the Bastard.

William the Bastard is another name by which William the Conqueror was called. William was the first Norman King of England from Christmas, 1066 until his death. His birth was illegitimate which is what landed him his unfortunate nickname.

I see three good reasons for this name:

1. William the Bastard was from Northern England and so is our style of beer.

2. Our beer is also of “illegitimate” birth as we are arriving at Northern English Brown Ale through a base kit of Cream Ale. Cream Ale is traditionally an American pioneered beer style.

3. It sounds cool and will allow me to use the picture above (of William the Bastard) as our label!

Feel free to send me your thoughts.