Pours a cloudy yellow with a bit of an orange tint. The head develops rapidly and reaches four fingers of thickness. It is white and very fluffy. The head retention is insane. It literally doesn’t recede until you drink it.

The aroma is earthy and a little grassy with some sweet malts. The hop smell is amazing and screams quality ingredients. There are some light fruit notes – maybe bananas and oranges. Quite understated but adds a bit of complexity.

The taste echoes the aroma with added elements of lemon and some spice – cloves maybe?  The taste is sweet from the malts but balances with the floral hops and the funky belgian yeast. The alcohol becomes increasingly more apparent as it warms but is never overpowering or unwanted.

The beer has a moderate body and medium to high carbonation with a dry finish. The beer is very effervescent and is mesmerizing to just watch through the bottom of your tulip glass.

This is the picture KingBobyJr originally commented on: 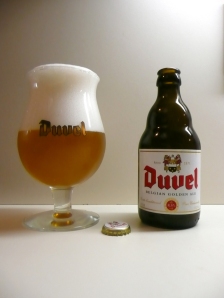 The title may have lured you to this post; however, allow me to immediately explain the difference between the two types of beer and eject Abbey Beers from the remainder of the discussion.

Abbey beers use traditional recipes for brewing beer and may or may not be associated with an actual Abbey. In Belgium there are some marketing devices in place to help one determine if the beer is actually from an Abbey. The ones that aren’t typical brew the beer of a past abbey under license as the abbey may have ceased brewing sometime in the past.

The types of beer I am interested in discussing are Trappist beers. There are three strict conditions to be considered a Trappist beer:

This, to me, is a very intriguing list. Pair that with the fact that any beer geek can tell you that authentic Trappist beer are consistently some of the absolute best brews attainable…anywhere, and you have a very interesting conversation.

Take another read through that list and answer me something: how many other beer producers you know have any rules even remotely similar to this? All three of these points are going to have a pervasive effect on the beer brewed.