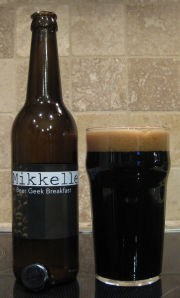 Beer Geek Breakfast pours a very deep dark black. The beer cascades a bit to develop a one finger tan head. I noticed the head looks a little lighter where it contacts the beer and slightly darker where it contacts the air on top. This reminds me of the crema in espresso. (Check the picture of the beer to the left and then click here to see some espresso I made recently).

Head retention was moderate and faded into a thin collar. Minimal lacing was left on the glass.

The smell is very appealing to a beer and coffee lover. You definitely smell some coffee but the dominating aroma is roasted malt. Other notes are of dark chocolate and perhaps a hint of licorice. This beer has been named appropriately.

First sip immediately reveals that the flavor profile of this brew is complex. Initially tastes of bitter dark chocolate which progresses to roasted malts and finishes with a definitive coffee aftertaste. I find that as this beer warms slightly the flavors really shine. I favor the coffee which comes out deliciously once the beer has sat a few minutes.

The beer is smooth and somewhat thick in the mouth with medium carbonation. I have tried (and reviewed here and here) several other coffee stouts or porters. This one just usurped the throne as my personal favorite.

I have another Mikkeller coffee based beverage in my fridge right now that may prove to be the true king. Check it out at the Mikkeller site. Should be interesting considering one of its ingredients is derived from weasel shit. 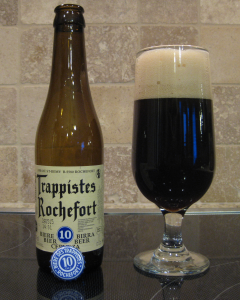 Aroma is a veritable buffet of dark fruits including raisins, plums, figs and grapes. There are notes of caramel accompanied by yeast, molasses and some brown sugar. It is an incredibly complex aroma that took me several minutes and a dozen sniffs to dissect and I still think there are more notes to uncover.

The flavor is a rich combination of the same notes in the aroma. I taste some chocolate that didn’t stick out in the nose along with the raisin, plum, fig, grape, caramel, yeast, molasses, and brown sugar. You can barely taste the 11.3% ABV hidden amongst the flavors but you are reminded it is there with the pleasant warming feeling the brew brings as you swallow. I would describe the beers dominant flavor profile to be sweet rather than bitter. The mouthfeel is medium bodied and smooth with medium carbonation.

I find the beer goes done smoother and smoother as it warms to room temperature. A stunning combination of flavors are found in this beer.

I would again highly recommend this beer to any beer nerds out there. I am creating quite a streak of amazing beers this past week. Probably because I just decided to do this blog and have been buying all the superstars.

One caveat to note – this is a big beer. I wouldn’t be serving this to any beer newbies. You need a developed appreciation for beer before you should tackle this giant. 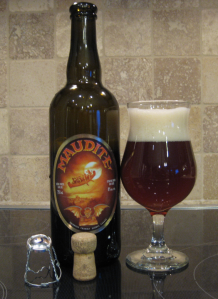 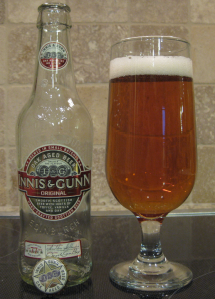 The aroma offered is unappealing giving me the impression the brewer has tried to mask the overpowering skunk smell with copious amounts of vanilla. There are faint smells of oak but the aromas expected from beer (i.e. where are the malts and hops?) are noticeably absent.

My tongue immediately picks up a skunky flavor paired with some bitterness from the hops. Gradually the vanilla hits but is undermined by a metallic aftertaste. The tastes that have the potential to impress are impaired by what tastes like a skunk sprayed some tinfoil. These flavors have no place in a beer.

The beer is light to medium bodied with moderate carbonation in the mouth.

The beer is dangerously close to being undrinkable for my palate; however, I have the distinct impression that the brewer has taken a very sub-standard beer and tried to turn it into a premium brew by dumping it in oak barrels.

History lesson: In fact, that is precisely what has happened. Originally a Scottish company intended to make a scotch whiskey that had a beer finish. To achieve this the distiller filled the oak barrels with beer in order for the barrels to soak up the beer flavors in the wood. The beer was then discarded and the barrel was filled with scotch whiskey.

Some workers of the distillery braved up enough to sample the discarded beer and discovered it was both drinkable and very unique. Innis & Gunn was spun-off to exploit this discovery.

Now Innis & Gunn has the beer brewed by an “unnamed” brewery which is then put in white Bourbon barrels from the United States to age.

Conclusion: An interesting beer to try but I won’t be seeking it out again. I would sample other Innis & Gunn varieties but I would not entertain the thought of buying the Original again unless I found information stating that they have significantly improved their initial beer. 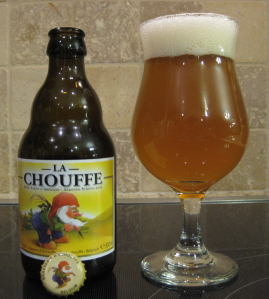 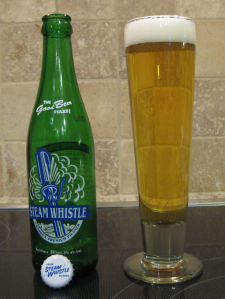 There is a distinct aroma of hops. The smell is slightly grassy, bready, and a little bit skunky.

The taste is very crisp and clean. There is that pilsner bitterness which is mixed with average to high carbonation. The result is pleasing and very refreshing. The beer goes down very smoothly.

The beer is not complex which is not a negative comment. It delivers an enjoyable but fairly simple pilsner. This create a beer perfect for those times where you know one isn’t going to be enough. 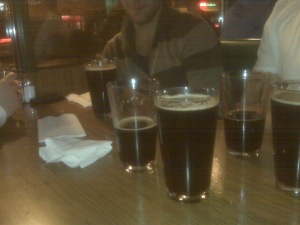 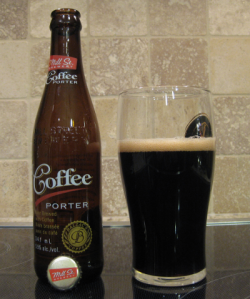 Pours a deep black through which almost nothing is visible even when held up to the light. The head developed rather short and thin with little retention. By the time I could even snap a picture the head was already disappearing. The head is a light tan color.

The aroma of this beer is exciting as you smell two things immediately: roasted malt and coffee. First the burnt malts dominate the smell and then give way to coffee. It smells very similar to immediately after I grind my coffee beans. To someone who loves both beer and coffee this aroma tempts me (like no other beer has) to make it a permanent addition to my personal breakfast menu. I immediately worry that the taste won’t deliver on the promise the aroma has made.

The mouthfeel is surprisingly bubbly for a porter. The initial notes in the taste are of very roasted dark malts with a hint of syrup. I find the coffee is overpowered initially. The aftertaste is definitely of coffee. It is delicious and lingers very long. You can tell quality coffee was used in this beer. The coffee taste is of better quality than you find in certain $4 cups of coffee. It may even make you wonder which beverage you drank.

There is a bitterness in the taste throughout the initial taste lasting quite a while after you swallow. There is not a great deal of complexity to the taste. About two or three dominant and complimentary tastes done very well.

I think this beer is amazing for the price. It is certainly going to be found in my fridge often. 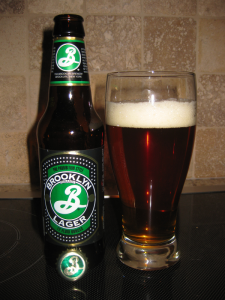 The aroma is of pungent American hops that are slightly toasted and nutty.

The taste is crisp and clean with a good mouthfeel. Quite carbonated in the mouth.

Initial flavors are of mild malt that give way to dominating bold hops. Bitterness is lingering and satisfying. 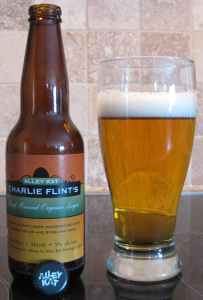